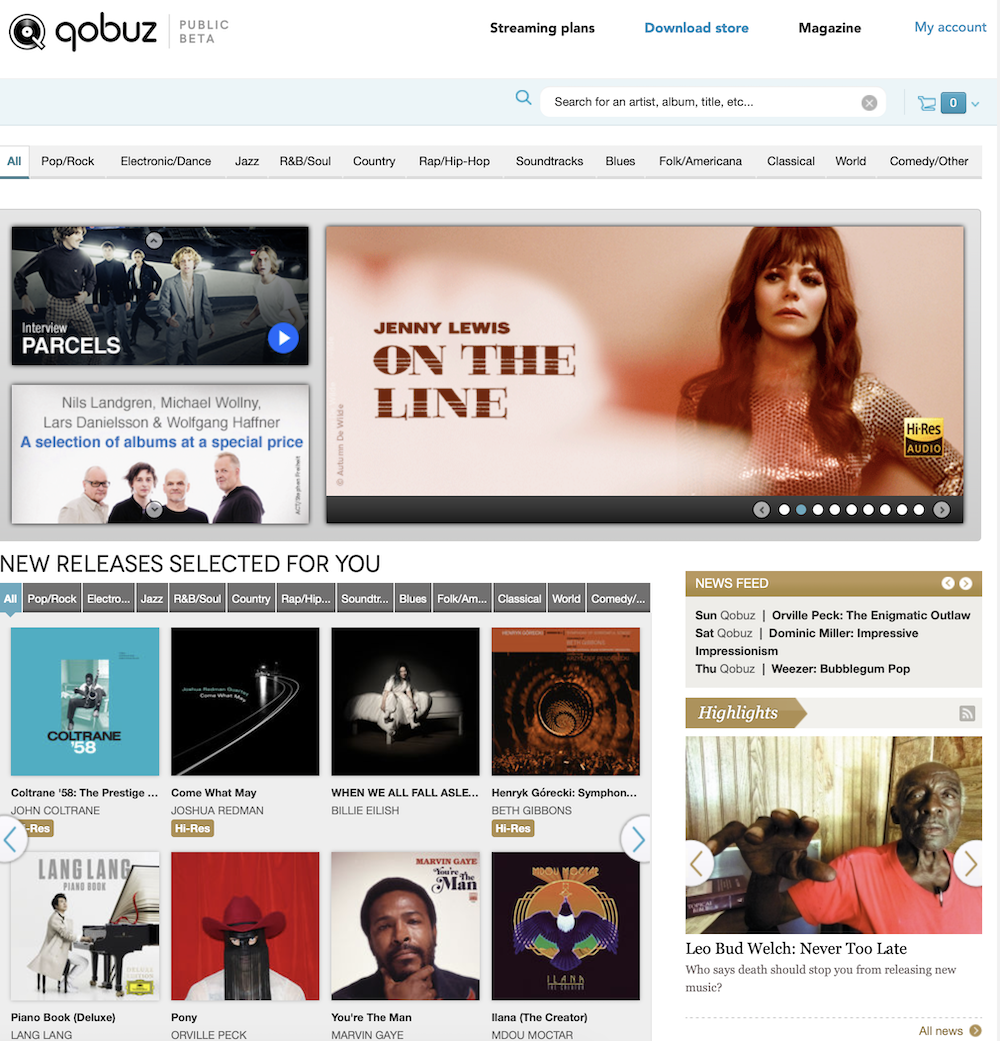 As most of you know Qobuz has went into full launch for any willing subscriber to sign up.  The web site is still labeled beta and I suspect they are rapidly tweaking and certainly still adding content (more on this experience shortly).  This entry is written from the context of an existing TIDAL user so those looking for comparisons with Spotify or Apple Music look elsewhere.

To catch everyone up...

Available on all platforms, Qobuz allows for streaming up to 24-bit/192 kHz true Hi-Res FLAC – about 29x the audio quality of MP3.  Similar to other streaming services you can also download your favorite tracks offline on all devices, including mobile and desktops.  Qobuz offers ‘unlimited downloads’ for offline listening.

Qobuz touts that its music experts highlight music of interest based on user choices.

Qobuz claims they their catalog is forty million tracks with two million in Hi-Res.  Prices range from $9.99 per month up $24.99 per month with discounts for purchasing a year at a time.  Qobuz also has something that is a bit unique which is the Sublime+ subscription level at $299.99 per year.  This subscription that offers the same Studio experience up to 24/192Khz streaming also provides significant discounts in their online store.  Unlike other services Qobuz has a download store similar to what you see on other sites like HDtracks or Prostudio Masters.

What level did I choose?

After evaluating Qobuz for a very short period I opted to go with the Sublime+ as I still like to purchase digital albums and the discounts provided virtually pay for the entire streaming subscription after a handful of purchases.

For example, the excellent Coltrane '58: The Prestige Recordings is $17.99 with the Sublime+ subscription.

The same album on HDtracks is $43.98.  Even with a promo code you will not approach the Sublime+ price.

Just choose your purchases via your account on web or via the Qobuz apps. 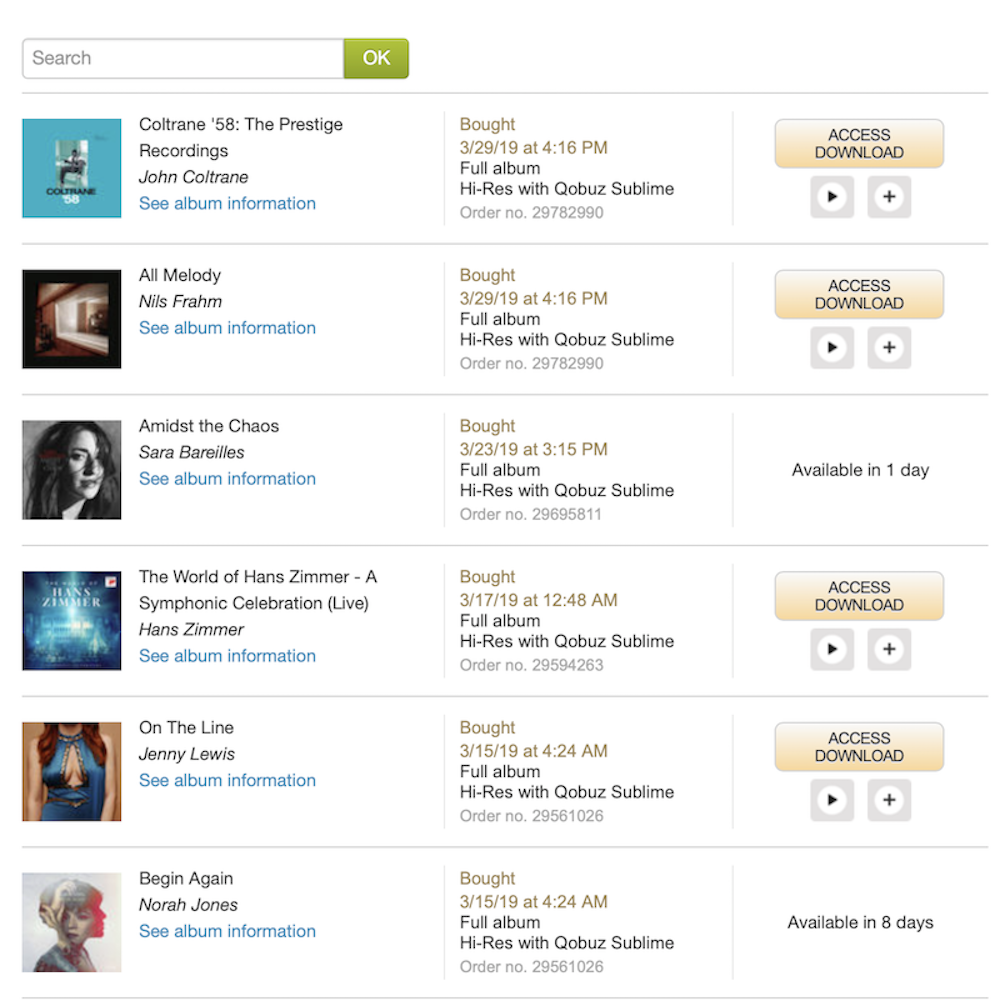 Then choose the format you desire. 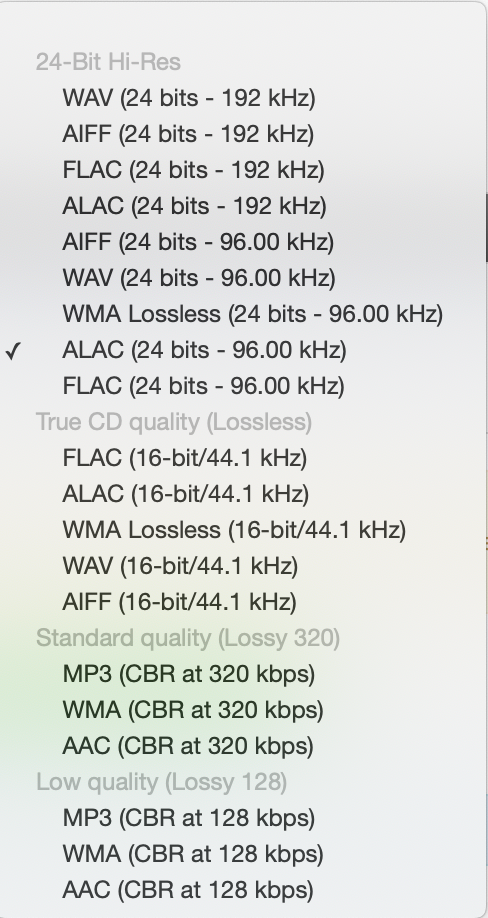 TIDAL doesn't offer this type of full store and I actually prefer their store over several music download site where I frequently purchase.  There is no DSD here most anything else you want is available.

You can even pre-order titles.

Based on some personal experience it would appear the track catalog is still expanding and perhaps this is the reason it is till labeled beta.  When spot checking playlists and albums I had on my TIDAL account I found some discrepancies.  Some were overcome with slight changes in naming.  One particular artist I listen to is Nils Frahm and I noticed TIDAL had many albums to choose from while there was only a few on Qobuz.  I sent a note off to customer service which was promptly answered indicating they would be adding some more of this artist very shortly as they are importing in other labels.  About ten days later when checking to see if anything changed the large selection I was used to seeing on TIDAL was available.  I was very pleased to see not only the quick response to my e-mail, but they did what they described in quick order.

I think this is an important item to note if you find something missing that it become available as they flush out catalog.

As a side note the excellent site Soundiiz can transfer albums, favorites, artists, and tracks from various services and I used this to move my items between TIDAL and Qobuz.

Experience with iOS App on iPhone/iPad 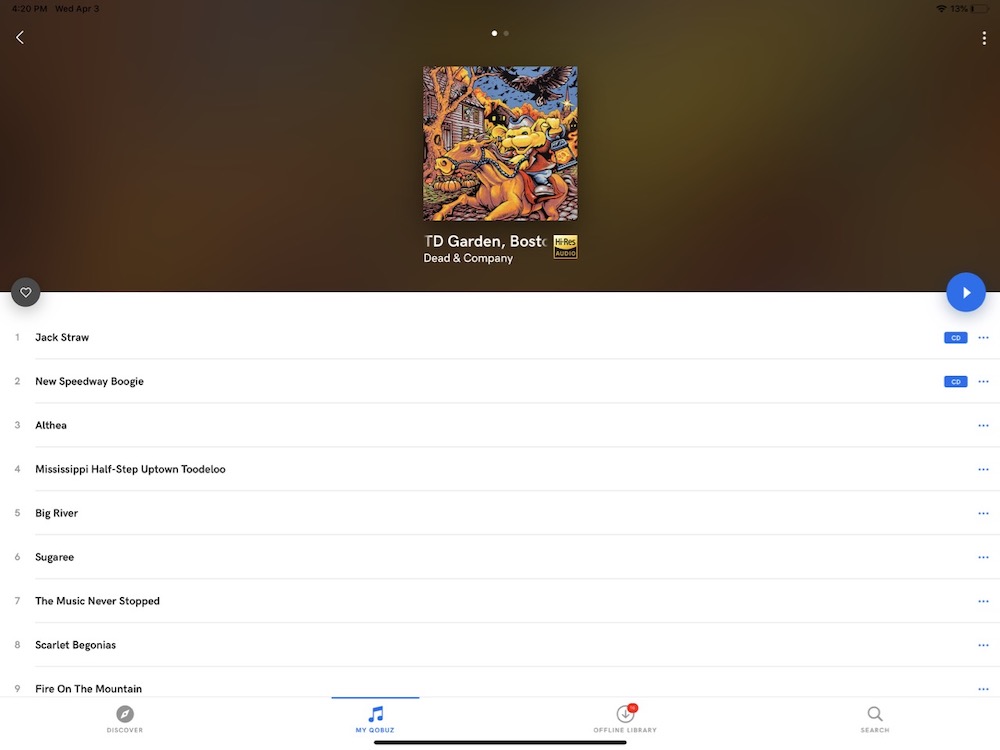 I used the native iOS apps on several trips during my first two months and was able to operate much like I did with TIDAL in the past.  The above picture is from my iPad where I am downloading some off-line files.  Making the jump from TIDAL to Qobuz apps was very easy.

A key consideration for myself and other clients was native integration with the Aurender line of music servers.  Luckily given Qobuz has been available in Europe for years so support was already built into the Aurender application and also into about all high-end music servers and Roon on the market.  Layout of the categories is a little different with tabs for:

By the Media (Curated)

Purchased (shows all albums every purchased by your account) 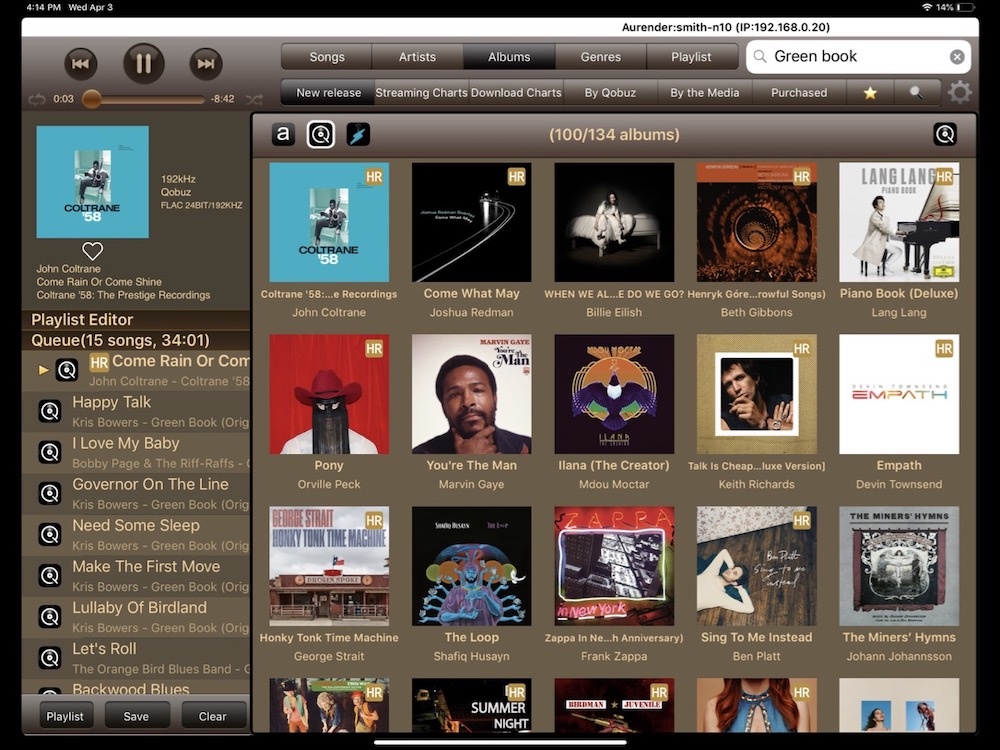 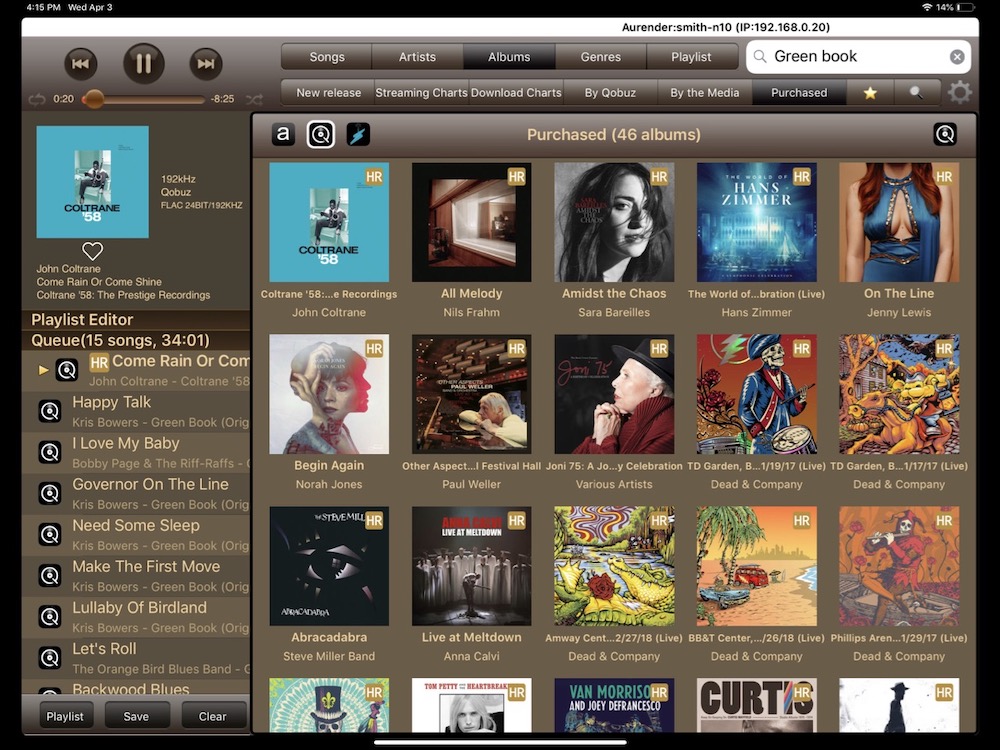 You can get artist bio information right from the Conductor app and there is also a link to Similar Artists that is very nice addition over TIDAL.  Expect not quite Roon like for metadata but there is some decent information here. 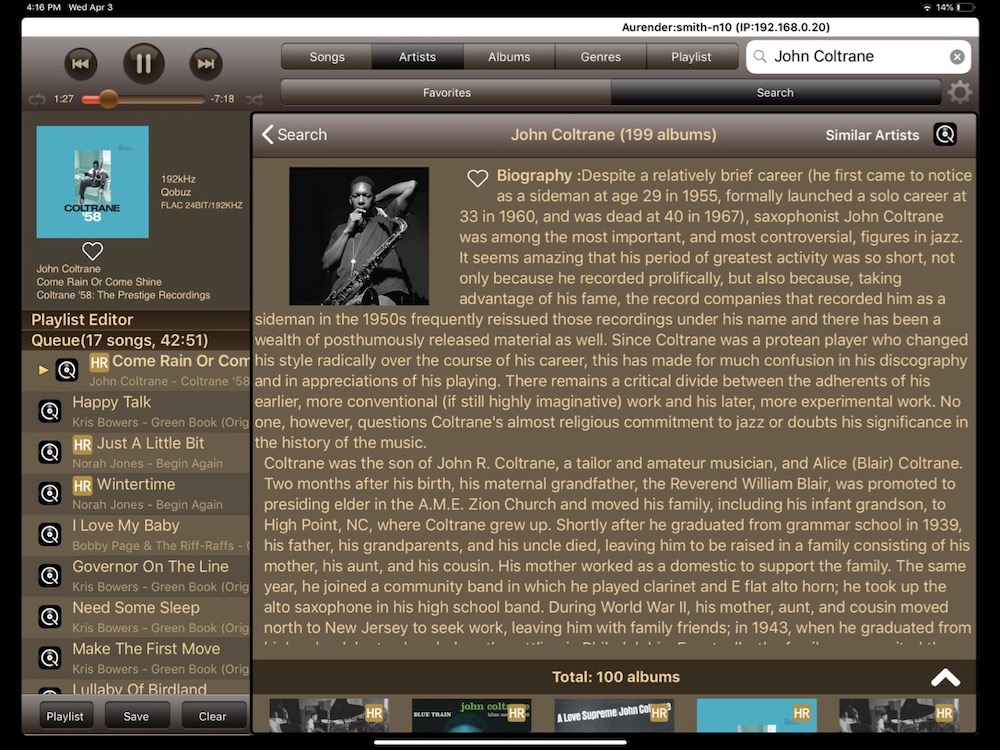 What about you know Sound Quality?

The major difference between TIDAL and Qobuz is how each address Hi-Res streaming.  TIDAL has partnered with MQA and so anything above CD quality has to be unfolded with either software or a compatible DAC that is capable of hardware unfolding of the signal.  Qobuz streams straight Hi-Res FLAC up to 24-bit 192Khz resolutions.  Regardless of your slant I am not personally bought into MQA, so I fully admit a bias to the Qobuz approach.

I did a number of AB comparisons between TIDAL and Qobuz and sometimes even with the same content stored locally.  This can be a bit tricky given you have to make sure you are using same recording of an album.  I think for many CD quality albums TIDAL and Qobuz sound similar.  When I did hear differences, I felt the Qobuz version sounded better with a little more weight.  When comparing Hi-Res I don't think it was a apples to apples comparison because my DAC doesn't do native MQA unfolding.  My Aurender will do the first unfold which is what I was using and in these cases I felt Qobuz was definitely better in sound imaging.  Could my bias have impacted me?  Perhaps.  Always test for yourself with your own equipment.

What is my conclusion?

I personally am very pleased with Qobuz and have since canceled my TIDAL subscription.  I don't have anything bad to say about TIDAL but Qobuz represented a user experience that supports non-MQA Hi-Res streaming, a download store that is now my preferred, and content that is presented to me seems more curated to my tastes.  Why I am not really sure, but five other colleagues have drawn basically the same conclusion and made the jump to Qobuz on their own.

I am sure Qobuz will be on-display in virtually every room at AXPONA 2019 this month and will be interesting to hear opinions from other colleagues.  At the end of day having a choice is a great.